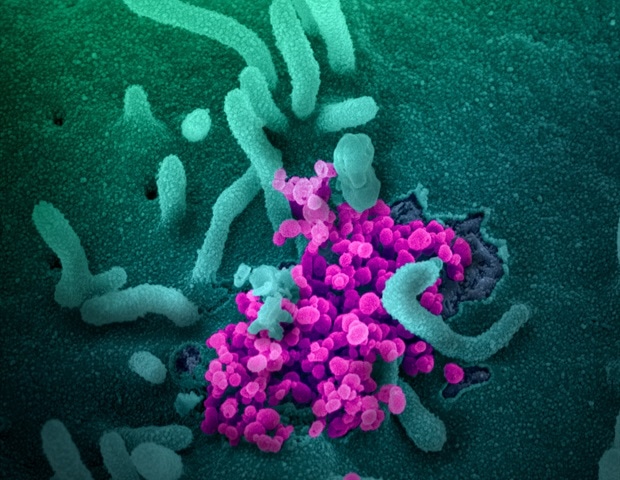 Researchers from Tongji Medical College, Huazhong University of Science and Technology, Wuhan, Hubei, China have looked at the outcomes of pregnant mothers with COVID-19 and their newborns. Their study titled, “Clinical features and obstetric and neonatal outcomes of pregnant patients with COVID-19 in Wuhan, China: a retrospective, single-center, descriptive study” was published in the latest issue of the journal The Lancet, Infectious Diseases. 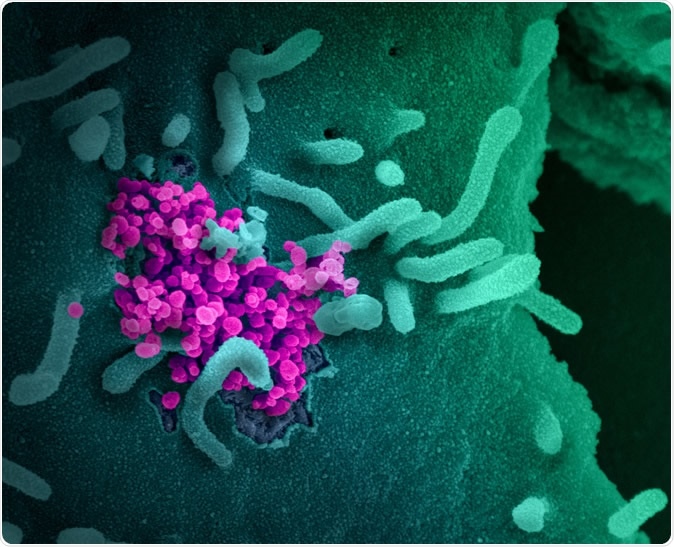 Novel Coronavirus SARS-CoV-2 This scanning electron microscope image shows SARS-CoV-2 (round magenta objects) emerging from the surface of cells cultured in the lab. SARS-CoV-2, also known as 2019-nCoV, is the virus that causes COVID-19. The virus shown was isolated from a patient in the U.S. Credit: NIAID-RML

What was the study about?

COVID-19 or coronavirus disease caused by severe acute respiratory syndrome coronavirus 2 (SARS-CoV-2) has affected large populations across the world. As well as affecting the elderly and those with underlying health conditions, the disease has also infected pregnant women.

The team of researchers looked at the presentation, clinical features, and outcomes of both the mothers and their babies in this situation.

The team looked for evidence in literature outlining the effects of SARS-CoV-2 or coronavirus infection on pregnant mother and their newborn babies. They reported that no risk of transmission from mothers to their babies at birth was noted. They speculated that the COVID-19 disease could have a similar course.

What was done during the study?

This was a single-center study at the Tongji Hospital in Wuhan, China. For all pregnant mothers admitted with COVID-19 disease, clinical features, treatment, and maternal and fetal outcomes were assessed. All mothers attending the hospital with COVID-19 positive status between 1st January 2020 and 8th February 2020 were recruited into the study.

For each of the pregnant women admitted at the hospital, throat swab specimens were collected from the upper respiratory tract. These were tested for SARS-CoV-2 infection using real-time RT-PCR at the Tongji Hospital. Other respiratory viruses were also checked for. These included influenza A and B virus, respiratory syncytial virus, parainfluenza virus, and adenovirus. Bacteria and fungi were also excluded as a cause for chest infection among the women, the team wrote.

The researchers found that a total of seven pregnant mothers were admitted at the Tongji hospital during the study period tested positive for COVID-19. The average age of these women was 32 years, and their ages ranged between 29 and 34 years. The average gestational age or pregnancy at term was 39 weeks. None of the seven women had exposure to Huanan Seafood Wholesale Market, said the researchers. This market was said to be the source of the viral infection. None of these seven women were medical workers. Three of them were admitted with their first pregnancies, while four of them were on their non-first pregnancies.

The women presented with fever (in 6 of the patients), cough, diarrhea, and shortness of breath (in one patient each). Within three days of admission at the hospital and testing positive for the infection, the women underwent a cesarean section. They were followed up on 12th February 2020. On CT scans of the chest, it was noted that six of the women or 86 percent had “bilateral pneumonia” or pneumonia affecting both lungs. In one of the patients, pneumonia had affected only one lung.

All seven mothers were given oxygen therapy using a nasal catheter. They were kept in isolation. They received antiviral treatment such as oseltamivir (at a dose of 75 mg twice a day), ganciclovir (0.25 g twice a day intravenously), interferon (40 μg inhaled once a day), arbidol tablets (200 mg tablets thrice a day). They were also given traditional Chinese medicines, Jinyebaidu granules, and Lianhuaqingwen capsules. A single antibiotic was used in two women, and in five women, a combination of more than one antibiotic was used. The commonly used antibiotics belonged to the class of cephalosporins, quinolones, and macrolides. Five of the women needed methylprednisolone or steroids after their cesarean section. None of the women needed ICU admission.

Outcomes of the mothers and newborn babies

The outcomes for the mothers and their babies were positive. Three of the newborn babies were tested for SARS-CoV-2, and one of them was found to be positive for SARS-CoV-2 at 36 hours after birth. The team wrote, “With intensive, active management, the outcomes of the pregnant women and neonates were good. Although one neonate was found to be infected with SARS-CoV-2 36 h postpartum, up to the follow-up day, no pneumonia and other clinical symptoms and signs were found in all seven neonates.”

The researchers found that COVID-19 infection does not adversely affect the outcomes in pregnant mothers, especially if they are infected in late pregnancy. They wrote, “…these outcomes were achieved with intensive, active management that might be the best practice in the absence of more robust data.” They also explained that the clinical presentation of these women was similar to non-pregnant women and men who had been affected by the COVID-19.

Today Only, The High End Version Of Everyone’s Favorite Hair Tool Is 50% Off
The Mental Health Toll Of Active Shooter Drills In Schools
9 hot tips I learned on my first all-inclusive vacation with kids
Discoveries may lead to new ways to treat patients with Allan-Herndon-Dudley syndrome
Probiotic supplements accelerate the maturation of microbiome in extremely preterm infants