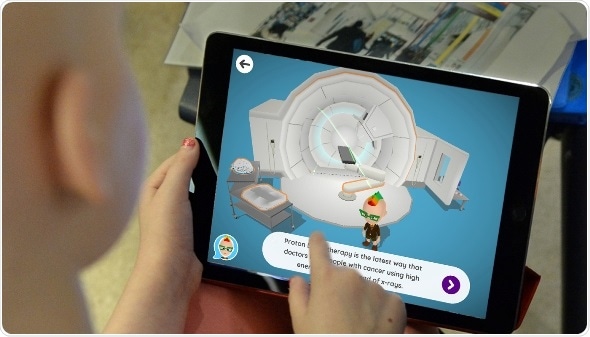 Xploro® has teamed up with Manchester’s world leading cancer hospital, The Christie, to deliver state of the art technology that helps child patients understand how Proton Beam Therapy works.

The Venturefest Digital Innovation winner has spent the last four years developing the new app ‘Xploro®’ which includes games based on the human body, 3D hospital environments for children to explore, and experiences so they know what’s going to happen while they’re being treated.

Everything is delivered through a chirpy, augmented-reality character that the child creates, and names themselves. It becomes their virtual friend, and leads them through every part of the app.

The internationally renowned cancer centre commissioned a brand new module for ‘Xploro®’ to be used by children undergoing Proton Beam Therapy. It includes unique environments modeled on the hospital itself and a 3D experience showing exactly what happens when someone has the pioneering treatment.

Xploro® ‘s CEO, Dom Raban, was inspired to develop the ‘Xploro®’ app after seeing first hand the importance of giving children and young people information when they’re being treated in hospital.

The clinical care Issy received, in the six hospitals she was treated at, was second to none, however it soon became apparent that the information she received about her illness and treatment was severely lacking and it left her feeling scared, anxious and isolated. It was this experience that led to Dom and his team to come up with ‘Xploro®’.

Looking back at Issy’s experience Dom recalls “I was struck by the lack of age-appropriate information that was available for Issy – she was far too old for picture books, but too young for adult information. Once Issy was on the mend, I realised that I could do something to plug that gap. At my other company, Corporation Pop, we have a first-class team of app and game designers and developers so it seemed obvious that we put that expertise to good use. After four years of hard work and significant Government funding it’s fantastic to see the app being used by children at one of the hospitals that my daughter was treated at.”

Research has shown that when people understand what is happening to them when they are ill and having treatment, they experience better clinical outcomes; the Xploro® app is designed to give them that knowledge and information in a fun, and engaging way.

The Christie is the first NHS hospital in the UK to introduce high-energy Proton Beam Therapy, an advanced radiotherapy treatment which precisely targets cancer without causing damage to healthy cells around it. Previously the NHS has funded expensive treatment in America and Germany causing huge disruption to families like Dom and Issy’s and costing many thousands of pounds more than having it in the UK.

Proton Beam Therapy is particularly suited to children and young people whose bodies are still developing, which makes ‘Xploro®’ a great match for The Christie.

After trials at The Christie and Royal Manchester Children’s Hospital, Xploro® will be available for wider use when it will include an artificially intelligent chatbot which can answer any questions the child has about going to hospital. Dom and his team are already in talks with hospitals around the UK, Europe and North America and the future for ‘Xploro®’ lies in its expansion. There are already plans to create versions for other illnesses such as Diabetes and Asthma as well as develop the app for older audiences. By next year Xploro® will also be available in other languages.